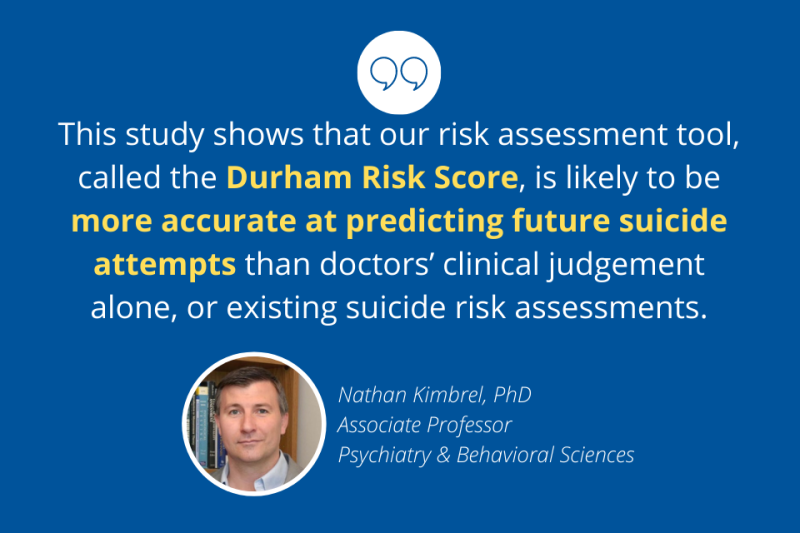 The Durham Risk Score is a new risk assessment tool that enables practitioners to better identify those most at risk for suicide attempts, potentially saving lives

A suicide screening tool developed by researchers from Duke Health and the Department of Veterans Affairs is far more accurate at identifying patients at risk for attempting suicide than current clinical assessments, which often have poor accuracy rates that can lead to the loss of life.

With suicide rates on the rise in the United States even before the COVID pandemic exacerbated mental health issues, the need for a more accurate screening tool is critical. Study authors, publishing in the journal PLOS Medicine, developed a streamlined checklist that is much more accurate than prior tools and can be used by physicians in most all settings.

“We set out to develop a suicide attempt risk checklist that could help practitioners reliably discriminate high-risk patients from low-risk patients,” said lead author Nathan Kimbrel, Ph.D., associate professor in the Department of Psychiatry and Behavioral Sciences at Duke University School of Medicine and a clinician investigator at the Durham Veterans Affairs Health Care System.

Kimbrel and colleagues developed and validated the Durham Risk Score (DRS) using data from three large national studies comprising more than 35,000 participants. Roughly half of the study cohort was used to develop the assessment tool, whereas the other half was used to validate it.

The 23-point checklist focuses on behaviors and life events that research has proven are red flags for future suicide attempts, including previous suicide attempts and suicidal ideation, psychiatric hospitalizations, substance use disorders, non-suicidal self-injury and posttraumatic stress disorder, among others.

Scores are assigned to each of the checklist questions based on statistical analysis and well-established research. Importantly, tabulating the score is simple and unambiguous, enabling practitioners to administer and assess the scale in a wide range of clinical settings—a feature the researchers said was imperative for successful implementation.

“If the surveys are long and difficult to score, it’s not all that useful in a clinical setting, so physicians often rely on their best judgment,” Kimbrel said. “Statistical models and machine learning models are much more accurate in making these assessments, but they typically require that patients have been seen at a facility previously and already have information logged in electronic health records.” In many cases (e.g., the first time a patient is seen at a new facility), this type of information is not available.

Using the DRS risk assessment tool, doctors can rank patients from high to low risk. The study found that most suicide attempts—82 percent—occurred among people who scored within the top 15 percent on the DRS risk scores, and nearly one-fourth of suicide attempts occurred among those scoring in the top one percent; however, Kimbrel also cautioned that the tool still requires further validation in real-world settings.

“Having a more accurate suicide risk assessment truly could save lives,” Kimbrel said. “This month is National Suicide Prevention Month, and it’s important to note that nearly 800,000 people die by suicide worldwide each year. Prediction of suicide attempts remains a major challenge within the field of psychiatry, so it is encouraging that this risk assessment shows such potential.”