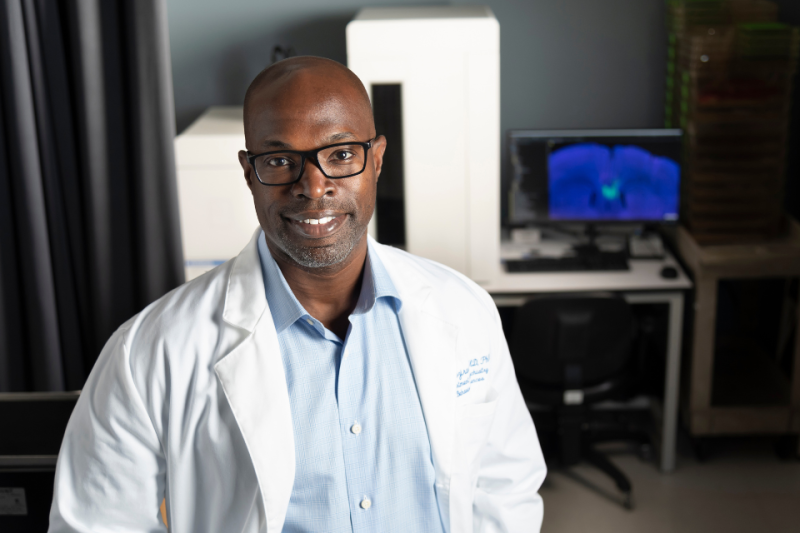 The $3.5 million award will adapt a cell-linker protein in humans that improves crosstalk between brain regions in hopes of rewiring circuits that go awry in psychiatric disorders

Duke psychiatrist and researcher Kafui Dzirasa, MD, PhD, the K. Ranga Rama Krishnan Associate Professor in Psychiatry & Behavioral Sciences, has been awarded the prestigious National Institutes of Health (NIH) Pioneer Award for 2022. The NIH has recognized Dzirasa as one of just eight scholars for the 2022 Director’s Pioneer Award, which specifically funds promising and often paradigm-shifting projects by exceptional researchers.

Amanda Randles, PhD, the Alfred Winborne and Victoria Stover Mordecai Assistant Professor of Biomedical Sciences in Duke University's Pratt School of Engineering, also received a Pioneer Award (learn more about Randle's research and how she plans to use the award).

Rather than studying individual brain regions, Dzirasa’s work has demonstrated the importance of crosstalk between brain regions and networks as the driver for depression and autism in mice.

His Pioneer Award will be used towards adapting a new tool, dubbed LinCx (long-term integration of circuits using connexins), to improve communication across brain cells. LinCx delivers a unique protein (connexin) to brain cells, which acts like a direct line for cells to talk with one another and better synchronize activity along circuits critical for mood and emotional regulation.

“We're excited because we recently demonstrated that this new connexin tool can modify brain circuits in worms and mice, so we're hopeful that it can translate to humans, too."
— Kafui Dzirasa, MD, PhD

“We're excited because we recently demonstrated that this new connexin tool can modify brain circuits in worms and mice, so we're hopeful that it can translate to humans, too," Dzirasa said.

The connector proposed by Dzirasa comes from the white perch fish, a type of bass, which has these molecules attached between auditory nerve cells and tail-flip cells. This ultrafast neural connection helps fish quickly escape when they hear an approaching predator.

“This unique cohort of scientists will transform what is known in the biological and behavioral world. We are privileged to support this innovative science,” said Lawrence A. Tabak, DDS, PhD, who is performing the duties of the Director of NIH.

Indeed, the Pioneer Award was established as part of NIH’s “High-Risk, High-Reward Research” program in 2004 to do just that: Support creative scientists who propose new and unconventional approaches to tackle major challenges in biomedical and behavioral research.

This article was adapted slightly from the original version published on the Duke Institute for Brain Sciences website.

Blue Devil of the Week: Creating an Inclusive Climate for those Facing Trauma