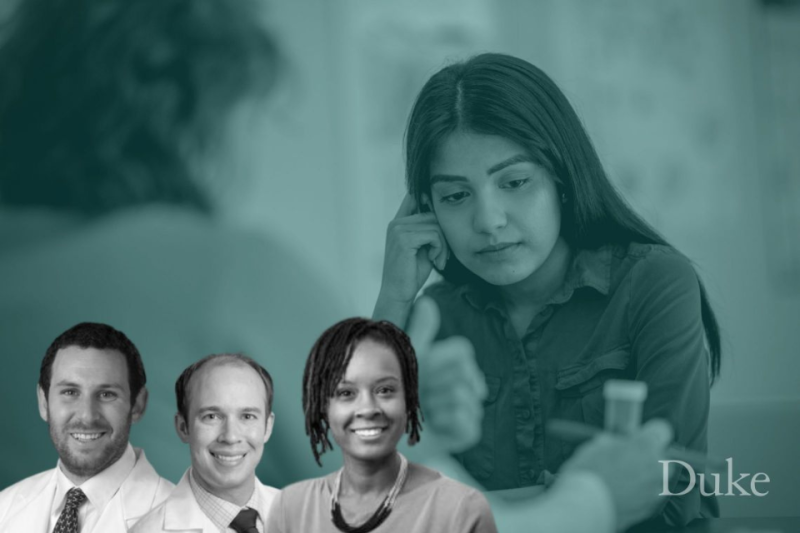 The pandemic has only amplified an already alarming mental health crisis among the nation’s young people—but there are ways for parents and communities to help, three Duke experts said in a media briefing on Wednesday, July 13.

Teens—a population already in peril before COVID-19 arrived—have struggled mightily under the weight of isolation, disconnection and the myriad family, financial and other problems prompted by the pandemic.

But parents can look for warning signs both in their kids and themselves, experts said Wednesday in a virtual briefing for journalists.

The three scholars, all with extensive backgrounds in adolescent mental health care, spoke on many topics. (Replay the briefing on YouTube.)

On the Seriousness of Adolescent Suicide

“In general, among Americans, the time between symptom onset and treatment is about five to 11 years. It takes nearly five to 11 years from symptom onset to when someone starts receiving treatment. For kids that’s a significant 11 years. That’s a long period of time that a kid has been experiencing mental illness. And from there what we frequently see is only about 20 percent of kids who are experiencing mental illness receive care.”

“It’s not just mental illness that can cause these tragic and bad outcomes leading to suicide. Things like adverse childhood experiences. Social drivers of health. Systemic racism … and other institutions we see like school, which many of us believe is critically important for child development. But academic pressure, academic performance are frequently reported as the greatest source of stress. School can also be a place that kids experience peer victimization and bullying.”

“In Durham what we have seen is that when school starts, compared to when kids are on break, there’s a 60 percent increase in rate of pediatric mental health emergency department visits during that academic time.”

On the Impact of the Pandemic

“We have seen a nearly two-fold increase in depressive symptoms and anxiety symptoms among children and adolescents. Nearly 20 percent of kids experiencing depression that’s impairing them, nearly 25 percent of kids experiencing anxiety that’s impairing them. And I fully believe the full outcomes that we’re going to see, the outcomes from the pandemic we’re going to continue to learn over time. But we already had a pediatric population that was in crisis for mental health reasons, then we had this event that raised the temperature.”

On Waves of Children in Distress

“Being out of school and being disrupted from the connections likely has a role to play in that. In North Carolina, more than 3,000 children have lost a caregiver due to COVID.”

“Ultimately, I think we have an opportunity to look at places like schools, community connections in other ways, and find ways to support children and families.”

On Predictors of Self-Harm in Children

“There are some consistent constellation of factors that remain pre-pandemic, but I think there are some specific elements about the pandemic itself, with COVID, that have exacerbated these conditions.”

“A lot of the individuals who do self-harm or who have suicidal ideation—where they think about ending life or other ways in which they would like to become more disconnected from society—is that they have had longstanding reports of symptoms.”

“We see that in many of these cases … these individuals aren’t just dealing with one specific type of mental illness or condition or area for growth. But that it is across multiple different diagnoses if they were to be clinically treated. Which takes a little bit more time and thought, for what is the best approach for this individual.”

On Symptoms Common among Children

“We are seeing behavior changes. One of the most common things that we see among kids is increased irritability, increased anger. If you have a kid that is having difficulty in other ways … consider, could there be some other condition going on?”

“During the pandemic and even before, I think a lot of us were saying we need to be checking in on each other. So for parents to be asking their kids if they’re feeling sad, if they’re feeling worried. While it can be difficult for parents, I think there needs to be a role for bringing up suicidal ideation or suicidal thoughts.”

On Interventions and Prevention

“The place to start ideally is with prevention. The notion for parents, for caregivers, for teachers, is to put on your own oxygen mask first.”

“It’s not because parents are the cause of their child’s distress. It’s because they are their best asset for supporting them. And similarly for the teachers. So from a prevention side, supporting teachers, supporting parents, camp counselors, the people on the front lines of supporting kids, if we go back to what we really need, that’s the place to start.”

“If you have a concern about a child, as a parent or as an adult who cares about the child,  certainly often the first point of contact is primary care. A pediatrician, a family doctor, a nurse practitioner, that’s a really good place to start. Primary care providers see 70 percent of mental health visits in the country.”

On Looking for Early Indicators of Distress in Kids

“I would definitely caution against engaging with any child in a diagnostic sense. Just enjoying the relationship, I think that connection, is really the most important factor there. But there are some things where if you talk to a provider, they should be able to help a parent discern between tantrums and real irritability at a younger age. There are different behavioral patterns a parent might recognize as being specific to a child. Talking to a provider can help them realize what is actually abnormal or a clinical event.”

“Sometimes that’s why being in settings related to childcare or pre-K programs in those early years are useful because teachers or caregivers in those settings are able to see what is normalized behavior. There’s going to be a general level of crankiness among preschoolers.”

“There are instances where it is clear to people who are trained what is abnormal behavior that’s beyond the typical amount of noise that would be expected for disruptive behavior.”

On the Intersection of Gun Violence and Youth Mental Health

“The idea of this being both a challenging moment but also a hopeful moment is very important. People and children have been through a lot over generations, so I don’t know this moment is worse than World War II or other traumatic things that have happened in this country. The ability to respond to it is really important. And I think young people are talking about it more.”

“Young people are actually speaking up about it themselves; youth themselves are probably our greatest allies in addressing this and not just seeing this as what the adults need to do.”

“When we think about death by suicide, the greatest risk factor is access to a gun. … If you have access to a gun, your risk of dying by suicide is much greater. There really is an intersection of this gun violence crisis and the suicide ideation/youth mental health crisis. Truly addressing safety by addressing access to guns for young people is directly a part of this.”

On Concerns over Screens and Privacy during Virtual School

“The screens on/screens off element is interesting from both sides of it. One of which is privacy and the need for that, and how kids and home environments were shown and that could have a negative impact. But there was also the push for the need for having kids feel more engaged by having screens on so they could actively engage with the teacher and other peers in the setting. I’m not sure the right balance was ever achieved.”

“I believe that technology isn’t something that should be vilified just because it can open up more channels for peer bullying or other sorts of negative influences.”

“There’s lots of literature to show how wonderful technology has been in connecting youth, specifically around this issue of mental health, where people have been able to build out social networks for support for themselves and be honest about what they’re experiencing.”

On Teens who Withdraw and Isolate

“Very frequently, what we are looking at is the kind of body of work as to how your teenager is doing. How your teenager had done in the past, and how they’re doing now. If you have a teenager that has always been a straight-A student or has done relatively well in school and is isolating more but they are still doing relatively well in school and are still engaged in the activities they enjoy doing, that’s when our concerns are a little bit less.”

“When you start seeing from lots of different angles that your teenager is getting worse, that’s when we really start worrying.”

On Public Policy Regarding Transgender Kids, Other Marginalized Groups

“I am less concerned about the broad, macro-level legislation as I am about the channels in which we’re allowing kids to discuss this openly in the school setting. In terms of reproductive health, or critical race theory and other factors, having a healthy dialogue that can be facilitated by people who can create safe environments for all the students in a classroom to have that conversation is important.”

“Having legislation that could spark conversation, it’s even more important to have an adult who can guide a healthy, robust and rigorous conversation about it. If that isn’t present, I’m not sure if it’s healthy or unhealthy for them to move forward and talkie bout it in that school setting.”

On What Policymakers Can Do to Improve Things Now

“Expanding Medicaid is probably the most important thing that the state can do. As we think about what the broad things are on the horizon … access to health care, expanding Medicaid, those are the things that actually would change this crisis and stem the tide. Getting individual treatment for individual children is critical. We need more providers, we need more people to do it. But this really is a will and a policy approach. As a society, do we care enough to do that for our children and youth as this time and see this as the next phase as the pandemic?”

“The amount of resources we put into fighting COVID: A fraction of that would make a huge difference in making treatment available for those who are symptomatic, and supporting parents and families so they can care for their children.”

“This is the next wave of the COVID pandemic. There is beginning to be momentum at the federal and state level to do that and hopefully at the local and community level we can sustain that and really have a robust response to say every child who has a mental health condition needs support.”

Nathan Copeland MD
Dr. J. Nathan Copeland is an assistant professor in the Duke Department of Psychiatry & Behavioral Sciences and an attending child and adolescent psychiatrist at the Duke Center for Autism and Brain Development.
Contact: sarah.avery@duke.edu

This article was originally published on Duke Today.